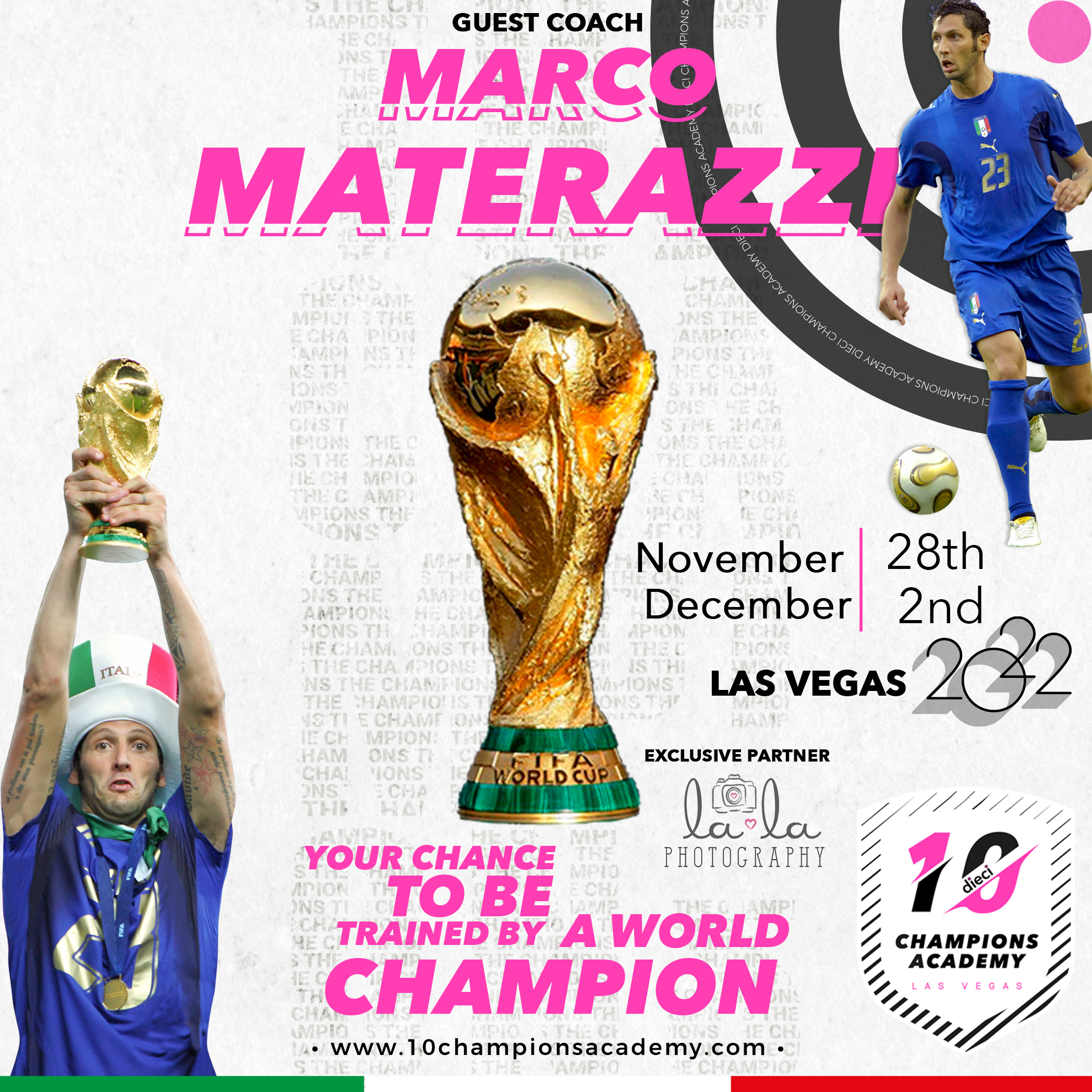 This is our famous "Dieci Champions Camp", the one-of-a-kind soccer experience to be trained by one of our "Dieci Champions Coach". The “Dieci Champions Coaches” are exclusively players that have won at least one trophy out of the Fifa World Cup, the Uefa Euro Cup, the Uefa Champions League or the “Ballon d’Or”. This time our "Dieci Champions Coach" will be the Fifa World Cup 2006 Champion, Uefa Champions League winner and Fifa Club World Cup champion Marco Materazzi. While the World Cup "Qatar 2022" is taking place, there couldn't be a better way to celebrate it than having our Champions living such a great experience with a legend that won the trophy. This will be a 5-days camp fully prepared and supervised by Marco Materazzi. It will be a unique chance to be coached by a true soccer legend and a World Cup champion. The first day of the camp includes a video session with our Marco Materazzi that will show some highlights from his most memorable matches,  explaining the technical and tactical details behind them. Then the action goes to the field where Marco Materazzi will lead our coaches, setting drills and exercises to improve our Champions skills and practicing what they’ve watched in video, and teaching all the secrets that made him the player he was. During the camp there will be a Q&A with Marco Materazzi where the Champions and their parents can make questions to him. At the end of the camp, the Champions will get a participation diploma and a picture with Marco hand signed by him by LaLa Photography*

Marco Materazzi is an Italian former professional footballer and manager. Early in his career, Materazzi played with various Italian teams in Serie B and Serie C, and with Everton in the Premier League. He spent two periods with Perugia (1995–98 and 1999–2001) and signed for Inter Milan in 2001 for €10 million. At club level, he won a number of major honors with Inter, including five Serie A league titles in a row from 2006 to 2010, one UEFA Champions League, one FIFA Club World Cup, four Coppa Italia titles, and the Supercoppa Italiana four times. Materazzi earned 41 caps for Italy from his debut in 2001 until 2008, playing in two World Cups and two European Championships. He was one of the key players in the 2006 FIFA World Cup Final against France; he gave away an early penalty that led to France's first goal, scored Italy's equalizing goal twelve minutes later and, in extra time, received a headbutt from Zinedine Zidane who was punished with a red card. Italy then went on to win the World Cup in a penalty shoot-out, during which Materazzi scored again.

Italian Serie A Defender of the Year: 2007

Senza categoria
“LIVE LIKE A PRO – ITALIAN TOUR 2023” – @ROME / MILAN – MAY 22nd – JUNE 6th
$7,999.00
Add To Cart
Our website uses cookies from third party services to improve your browsing experience. Read more about this and how you can control cookies by clicking "Privacy Preferences".